Ever since 1.4, this mod has a config file which is located in the config folder in your .minecraft folder. Here is an image of the file from 1.4, and the explanation.

When new biomes come out for later updates, they will be added to the config with their ID and to turn off it's spawning. 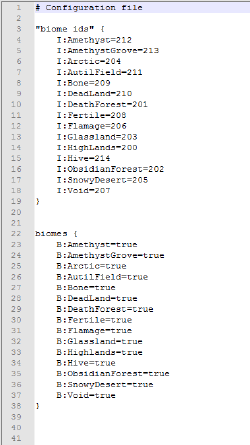 The first part under the section of "biome ids" lists all the biomes and their corresponding ID. It lists the biomes in alphabetical order, not necessarily by the ID number. If there is another mod conflicting with the biome IDs from this mod, you can change the ID so it doesn't crash. Or you can change the ID of the other mod's biomes, if they have a config.

The second section just has a name of "biomes" and a true value to all the biomes. This section also lists the biomes in alphabetical order like the first section. This section is where you can turn off a biome, and not have it spawn. By default all of the biomes are allowed to spawn, so they all have a value of true. If you don't want the Arctic biome to spawn because you think it's not really eccentric, then set the value to false and launch the game. And hopefully the biome won't spawn, not really sure haven't tested it fully..